I think I may have discovered my least favourite parenting job thus far: potty training. There’s no quick fix and it can be all encompassing, and that’s tough. I wanted to palm it off on someone else, for them to deal with it, but that’s not really how motherhood works is it?! So I was left tearing my hair out and doing what all modern mothers do: googling the heck out of it! There are a million and one different blogs and advice sites out there and I’m probably not going to say anything new but if it helps just one person feel less alone in their potty training journey then it’s a post well-written in my book.

I thought, having trained one child, that I knew what to do, what I needed and that we’d be all done within a few days and we could venture out again. However, it took a lot longer this time around: maybe because I was training a boy this time (and ‘they’ do say boys can be trickier to change), maybe just because every child is independent and different, they don’t really like to follow the mold and be predictable. And that’s ok. William has certainly inherited his father’s stubborn streak and so I think it took a little longer and a bit more preserverance for him to realise we weren’t just going to give up and put him in nappies because it was easier! 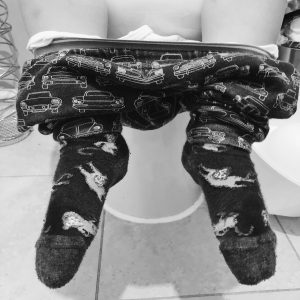 So with that all having been said, here are my 5 top tips for what I found helpful/useful this time round:

1. Have LOTS of pants We chose the pants together so he had ownership of them and they were a design that he was happy with. Of course we ended up with a mixture of Paw Patrol, Tractors, Cars and Trains and he’s been very excited to tell people what he has on his pants each day! We have about 15 pairs, which have been very much needed as we have had a fair few accidents.

2. Give an INSTANT reward It doesn’t really matter what the reward is, whatever works for your child. It could be a sticker, a sweetie, screentime etc. William loves chocolate and so we agreed together that he would get 1 chocolate button every time he went to the toilet. This was increased to 2 if he told us he needed to go before, rather than us asking/reminding him. I forgot the reward one day and we had several accidents, started giving them again and no accidents! The key is the fact it’s instantaneous: as soon as he got off the toilet, he got his reward so he made the direct link between going, and getting his treat. We only needed to do it for a few days just to help at the start and then he got a larger reward after a week of successful toilet trips. He chose a Lego set as he’s been desperate for one so he can be just like his big sister!

3. Stay INSIDE This isn’t an easy thing to do for most Mums. You’ll know how hard staying in can be: everyone gets bored, they get irritable, fights break out and the house becomes a complete mess of toys and crafts. But I think it’s vitally important to concentrate on your child and focus completely on them, in an environment they’re comfortable in, for the early days at least. We stayed in for about a week but it was less with my daughter, so it really just depends. Then we built up gradually to doing short trips to Grandparent’s houses etc. Personally I found that taking them out gives them too many other distractions and they just can’t concentrate on learning the sensation of needing the toilet. It leads to way too many accidents, which is never good for the washing pile, but above all, knocks their confidence in their ability to train.

4. Get a good TRAVEL potty When you do venture out, a good travel potty can be a life-saver. We have this one and it’s been incredibly useful for both my older two. The liners aren’t cheap but they are amazing at soaking everything up and means you can just tie up the bag and dispose of it easily. No carrying around a potty full of wee and risking it spilling or wiping out potties in the middle of a car park/shop! They also have cute little frogs with umbrellas printed on the liners and it’s quite a novelty to “wee wee on the froggies”, especially when it’s done sat in the boot of Mummy’s car in the chaos of school run (obviously not whilst driving along you understand)!!

5. Wait until they’re READY Every child is ready to potty train at a different age. Girls generally tend to train earlier than boys but that’s not always the case, and you shouldn’t let peer pressure determine when you do it! I’ve heard stories of people saying it took months, but in my experience it can be done in about a week (sometimes slightly less, sometimes slightly more). That’s not to say we never have any accidents anymore, but they are only occasional. If it’s really not working, leave it a couple of months and try again. We originally tried last September as William was showing many signs of being ready but it quickly became apparent that it wasn’t working and so we left it until January and have finally cracked it!

It goes without saying that lots of patience and positive praise is also needed: by the bucket load in fact. We made a thing of clapping and cheering every time he went on the toilet and gave him loads of encouragement but that’s not to say I didn’t ever loose my patience when we were down to the last pair of pants. Or an accident happened right after I’d checked if he needed to go! But hey, we’re all human, you’re not alone if you’re potty training your child and you will get there, one way or another. Good luck!