Well last year was all about the diggers so it seemed only fair that this year was all about the tractors. We’re talking about William’s party of course! And I actually loved this party set-up, as I had to get all creative. There is a severe lack of tractor party supplies out there (in the UK at least), especially John Deere ones, and what other tractors are there really?! So I loaded up Pinterest, cracked out my glue gun, and printed, cut and stuck to my heart’s content, and this was the finished result.

Let’s talk about the backdrop first because I really believe that the backdrop makes the biggest impact at a party, in terms of decor. 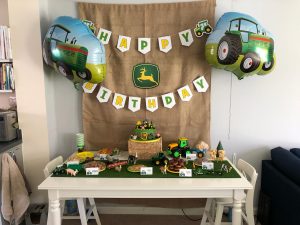 For those of you that follow me on Instagram you’ll have seen that we hung some prints above our dining room table, and I love them, however, they somewhat detract from whatever party theme we’re doing so now I feel a necessity to cover them in some way! Going with a rustic/farm/tractor theme I purchased a massive sheet of hessian from Amazon and then just very simply folded over the top, encasing a length of string and sewed along. I am not a sewer and I used the loosest, biggest stitches as it didn’t need to hold for forever, and it worked perfectly, so don’t be put off. Then I printed off the birthday banner and the John Deere logo and attached it to the hessian. I actually did all this in advance so it was easy just to hang the evening before his birthday. I’ve discovered that Etsy is amazing when it comes to party supplies as there are a wealth of sellers on there that have done digital printables of pretty much anything you could want, and John Deere party supplies are obviously much more of a thing over in America  because I found loads of great bits! The banner was from this Etsy seller

Next up was the table itself. It started off with an artificial grass table runner, and then I dug out William’s toy tractors and farm animals to dot around the food on the table. Of course, it wouldn’t be a party without hats and so I made up some little green and yellow party hats for the animals and stuck them on using blue tak to make sure I didn’t ruin the animals themselves. I found tractor food labels from this Etsy seller and we came up with some imaginative names for various party food – ie, ‘Hay Bales’ (rice krispie treats) and ‘Cow Pats’ (cadbury caramel bites). It was such a fun little set up and William enjoyed helping me in the run up to the party coming up with the ideas etc. 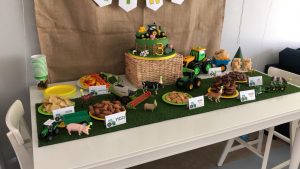 And then onto the cake. 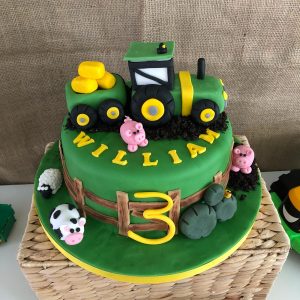 I’m a bit of a baker and so I make all the children’s cakes myself. The design is one I found on Pinterest and just tweaked a bit so I can’t take full credit for that, but I made everything myself. The tractor and animals were all made from fondant and I just sat and did them in the evenings in the couple of weeks leading up to the party so they had chance to dry out properly before being used. I’ve never made fondant animals before but I actually found the process quite therapeutic and I’d definitely be up for doing some more in the future. The little blackbird on top of the tractor was on request from the birthday boy himself, so how could I refuse?! I then sat the cake on top of an upturned wicker basket that I already had, which served to look a little like a hay bale and elevated the cake above the rest of the food.

So that’s about it really, it was quite an involved party, but only because like I said, there was a lack of readily available supplies and actually, I very much enjoyed getting crafty and resourceful for this one!

I’d love to hear from you if you have any questions or want to know more, so just drop me a little comment and I’ll get back to you.