I can’t quite believe that I’m here writing a 3 month update. Surely I’m the woman that’s only just had a baby and I’ve got a teeny, tiny, squishy newborn, no?! People still tell me that she’s tiny, and she isn’t one of those babies with those gorgeous rolls of newborn podge, but to me, she seems a mile away from that tiny baby that was placed on my chest three months ago. You see, Imogen was my smallest baby. My first two went almost two weeks overdue and by contrast I was scheduled in for a c-section at 39 weeks with Imogen. She weighed 7lb 2oz. This is a perfectly average weight, but compared to William (who weighed in at a hefty 10lb 10oz), she seemed minuscule. Anyway, I’m rambling and if you want to know more about Imogen’s birth, let me know and I might write a separate post about it some day. (I also know I want to write about her NICU journey but I’m not sure I’ve quite come to terms with it enough to write that one just yet.)

Imogen at three months is beginning to show us little sneaks of her personality, which I absolutely adore and I find myself swaying between being really excited to watch her grow; to see her play with her siblings and wishing she’d stop right where she is. I guess it’s kind of selfish and self-indulgent but I know it won’t be long until I’m no longer the centre of her universe. At the moment she looks up at me and beams her biggest smiles and she babbles away at me but I know before long she’ll be yelling, “bye Mum!” as she runs off to play with her friends without so much as a backwards glance. 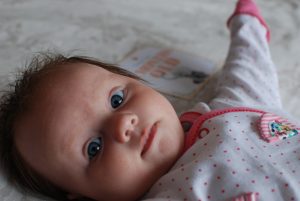 I thought I’d split this update into sections and then I can easily see how things are changing month by month when I inevitably look back on these. So here goes:

Imogen has naturally got herself into some sort of routine and I’ll touch on this further down with regards sleep and feeds, but what I will say is that I haven’t forced a strict routine upon her, it just wouldn’t work with our lifestyle. However, because of the older two and having school runs to do, our Monday-Friday tends to follow the same sort of routine naturally, and actually, she seems to thrive on this. She’s much more unsettled during the weekends when our routine is usually more fluid.

For the last 4 weeks or so Imogen has started to sleep through the night. We have always taken her up to bed and tried to settle her for the night when the others go up between 6:30/6:45. In reality this means that by the time the bath/bed routine is done, she is settling in her cot around about 8pm and she is now waking up between 5:30 and 6am. However, during the last week, she’s started waking in the early hours, which I think is just a temperature thing. We’ve had the windows open as it’s been so hot in the evenings but then she is obviously getting chilly overnight. Fingers crossed she goes back to sleeping through although the 4 month sleep regression is looming!

In terms of day time naps, she often snoozes on the school run but her naps are a bit all over the place. Sometimes she’ll nap in her cot and at the same time as her brother…on these days I do a little happy dance and celebrate with a quiet cup of tea, but more often than not her naps are short and often end up being on me or on her play mat. So we’re very much in the early days regarding naps and are yet to get a proper routine with set nap times.

For a number of reasons Imogen is mainly bottle fed – the formula/breast debate has been done to death and it really doesn’t matter as long as baby is fed, so I won’t go into it all now. Happy Mum, happy baby is my motto. Anyway, she generally has five 7oz bottles a day (although she rarely drains them all) and then she often has a breastfeed around our dinner time to keep her going until bedtime. Her times roughly stay the same: first thing, breakfast, lunch, dinner and bedtime but obviously this can and does change as her routine and sleep times change.

I haven’t had her weighed since she was 6 weeks old so I’m not sure on her weight but if she is still following the same curve on the growth chart she’ll be about 5.5kg or 12lb 2oz.

Clothes wise, we packed up her 0-3 month clothes last week and she’s been in exclusively 3-6 months since. Most of her clothes are hand-me-downs from her sister but we have had to buy a few new bits for the hot weather as Lydia went into this size when it was the end of October, so totally different seasons.

The play mat has been a big hit in recent weeks. To the point where if we’ve been out and she’s been held a lot, she looks like the cat that’s got the cream when we lay her back on the floor. I think she likes the freedom to move as kicking her legs and waving her arms around seem to be her favourite thing to do at the moment. She still can’t really hold on to a toy to play with but I’ve noticed in the last week or so that she will now look at and bat for toys with her arms.

She can laugh and smile as well as gurgling and coos when we talk to her.

I’m pretty confident she recognises my face and she’s recognised my voice from birth.

She bats at toys and likes to bear weight on her legs sometimes.

Other things to note

She is still on infant gaviscon but she only has 1 sachet in each of her bottles and she is a lot less sicky than she used to be. All our children have been sicky babies but thanks to Imogen’s NICU stay, she was the only one to be put on reflux medication.

She is chewing on her fists a lot these days, which is usually a developmental thing and necessarily a sign of teething or hunger. 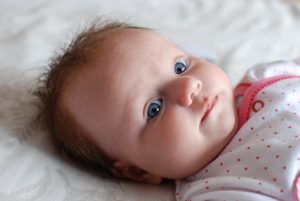 And that, as they say, is that. We know that in all likelihood, Imogen is our third and final baby and so I’m trying to savour every moment of these early days because we won’t ever experience it ourselves again.

One Reply to “Imogen’s 3 Month Update”